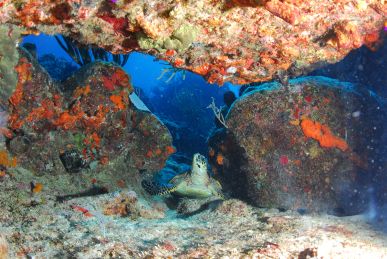 Tucked into the northern corner of the bay on the western side of Great Dog, the Chimney is really two sites in one.

Directly below the moorings, in 30 to 40 feet of calm protected water, are several massive coral heads rising up from a sand and rubble bottom. This is the Fish Bowl, so named because of the many friendly fishes abiding here. The yellowtails, sergeant majors, parrotfishes and other fishes have been fed by so many divers that, just like Pavlov's dogs, they are conditioned to the sound of Velcro. Open a BC pocket, and zoom, you'll be surrounded by a mass of finny mouths all looking for a handout.

To find the Chimney pass through the Fish Bowl heading towards the northern shore of the bay. Take the time to explore the several canyons and ridges that run parallel to shore. Work your way around the point. At a depth of around 45 feet or so, cut back and follow a canyon back towards shore. This should lead you under a large beautifully encrusted archway encrusted with cup corals and brightly colored sponges. Once through the arch you'll enter a steep-walled narrow corridor which ends with two huge rocks almost touching. The narrow slot between these two boulders is the Chimney, so named because of its resemblance to a rock-climbing formation of the same name. Before exiting through the slot take the time to look around at all the marine life on the walls. A dive light will reveal all the brilliant hues and hidden creatures-little shrimp, spotted rock lobster, anemones and a rainbow of sponges. The unusual white sponges adorning the walls resemble wads of chewing gum. If the Chimney slot looks too narrow for you, it is possible to swim out over the top of it. Once through the Chimney there are a couple of canyons along the cliff face worth exploring as you work your way back through the Fish Bowl to your mooring.

There are lots of less visited canyons and rock formations hidden here. You can also explore the base of the cliff further back into the bay. The bottom is covered with stones rubbed round and smooth from years of rolling in the winter surge. Among these stones is a wealth of tiny marine creatures such as brittle stars, baby flame scallops and an occasional scorpionfish. This is also an excellent place to snorkel.