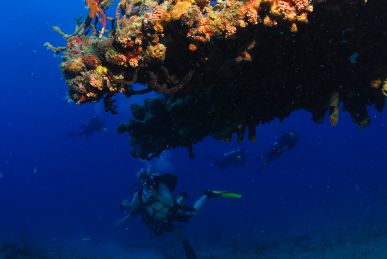 Located between Dead Chest and Salt Islands, Blonde Rock offers good visibility, lots of big fishes, fascinating topography, a taste of adventure, and photo opportunities galore. Blonde Rock is a set of two pinnacles, out in the middle of nowhere, that rise from 60 feet to within 15 feet of the surface. Occasionally current-swept and the only topographic feature of any significance in the Salt Island Passage, Blonde Rock is a natural magnet attracting all kinds of marine life including turtles, schools of jacks, cobia, barracuda and even the occasional shark. The twin fire coral-encrusted peaks (hence the "blonde" designation) rise from a gorgonian-covered plateau at 35 to 40 feet. All the way around this sheer-walled plateau is an amazing system of undercuts, ledges, canyons, tunnels and companion rocks. With a flashlight, the brilliant colors of the sponges, coralline algae and cup coral will leap out at you. The craggy upper lip of the wall is adorned with sea fans, deep-water gorgonians and a strange green-stalked colonial hydroid. After fully exploring the extensive undercut and the bowl itself, with its school of brilliant yellow French grunts, climb out of the back of the bowl and stop at the pit right at the edge. A small cave in the back of the pit hosts a perpetually spiraling school of glassy sweepers.