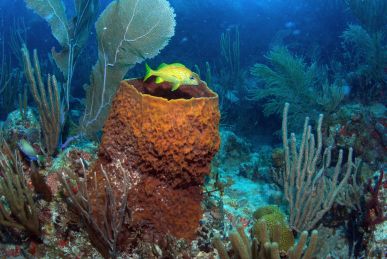 From the calm sandy anchorages on the south side of Green Cay and nearby tranquil Sandy Spit, the sea floor is completely covered with hard corals and gorgonians. Parrotfishes, squirrelfishes and occasional reef squid enjoy the calm here. Look for a large formation of pillar coral and a series of huge boulder/pinnacles on the exposed north side. They are covered with marine growth: hard and soft corals, delicate branching hydroid fans, and brightly colored sponges. Overhangs are filled with fishes - sweepers, juvenile angelfishes, glassy minnows and fairy basslets. Lots of marine life live in the protected areas at the base of some of the boulders are little hollows and depressions formed between the boulder and the bedrock.

Schools of barracudas patrol the outskirts. Black margates and other grunts and snappers occupy the spaces between the rocks and skittishly slink away upon your bubbling approach. Turtles are often seen paddling between the pinnacles. Large dog snapper and individual jacks scour the reef searching for unwary prey. A school of horse-eye jacks hovers in the water column along with a stately eagle ray. Creole wrasse and bright porkfish add a splash of color.