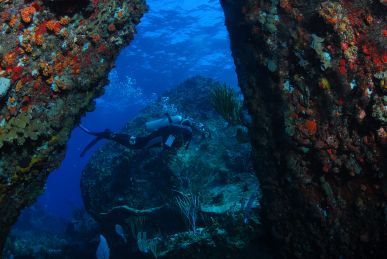 This is a fun knock-about dive on the west side of Dead Chest Island. While a tour will guarantee you see all the highlights, Dead Chest West is a good place to follow your own nose and make your own discoveries. Just be sure you explore the shallows at the end of the dive.

Directly behind the boat, along an unobtrusive spur-and-groove formation, is a low ridge with an archway. Schools of brightly colored grunts inhabit the arch and shy mahogany snappers will drift off as you approach. Under the overhang, look for beautiful encrusting sponges, fairy basslets swimming upside down, and the antenna of small spotted lobsters. A light will help. There are several other overhangs in the vicinity. Following the next sand groove towards the shallows, you'll encounter some high rocks with lobster dens at their bases. Nearby is a spectacular mushroom-shaped coral head that sprouts up from the bottom. Redspotted hawkfish, wrasses, gobies and chromis all buzz around its top. Juvenile Spanish hogfish operate an active cleaning station here; sit back and watch the patrons come in and take their turn.

The dramatic topside cliff face continues underwater and a slow cruise along it will reveal a fascinating topography with a few surprises. There are two caves. One has a triangular opening and is filled with glassy sweepers and banded coral shrimp, as well as a few spiny urchins. The other, at the far end of a large bowl, cuts into the back of a mammoth monolith. A large, green moray eel is often resident. For divers who enjoy shallow water exploration, there is a fascinating maze of alleys, arches and ravines just past the second cave.