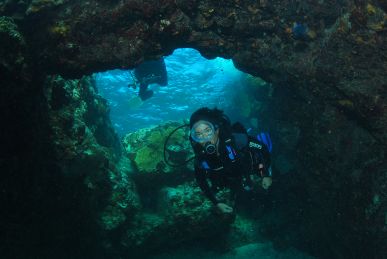 The south shore of Norman Island is compelling in its primitive beauty: rugged cliffs descend into the breaking surf, long tortured fingers of rock reach out just beneath the surface of the sea, and nowhere can the hand of man been seen. It's a world away from the yachting lifestyle found on the other side of the island.

Many years ago, when Annie and Duncan Muirhead were running Misty Law, the first live-aboard in the BVI, they were exploring this point as a possible dive site. Several large bull sharks rounded a corner and chased them back to their boat, and the site was named.

The point rises abruptly from the flat, almost barren sea floor. The water is usually clear here. When you first descend, look out into the blue for turtles and eagle rays. Then move up shallower, toward the underwater cliffs. Small gangs of curious barracuda loiter outside the rocks. The dive consists of exploring the numerous canyons and grottos that are defined by the network of ridges extending from shore. There is a large open cave in one of the canyons. A dive light will reveal all the glorious brilliant colors of the encrusting sponges that grow in the shadows.