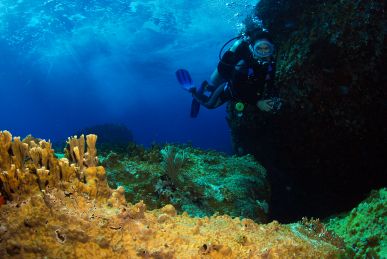 A barely breaking ridge just east of Cooper Island, Dry Rocks East juts out into the channel between Cooper and Ginger Islands, and acts as a natural focal point for piscine activity. It is an open water site with generally good visibility and the promise of large pelagic fish. The trade off is rougher conditions and occasionally strong currents. Looking out into deep blue water watching schools of large jacks or permit sweep by, you'll know that you're at a major underwater crossroads.

At the bottom of the mooring line there is a car-sized boulder and under it a large collection of highhats. Looking up the craggy rock face to the breaking surf on the surface you'll spot barracuda, schools of jacks, whitespotted filefish, pufferfishes and black durgons. In the scattered rock debris on the bottom, look for various small groupers such as hinds and coneys, and parrotfishes and trunkfishes. There are a few huge boulders scattered around as if they rolled down off the ridge. Under the first one, in addition to beautiful encrusting sponges and fans, a mixed school of goatfishes and grunts resides. The sea floor slopes down away from the ridge and if you follow the schools of Atlantic spadefish or the big French angelfish, you'll be in 80-90 feet of water before you know it.